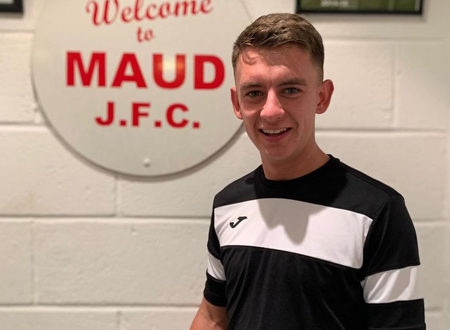 This season Namaka Subsea are delighted to announce that we have sponsored rising star Liam Hay from local football team Maud Junior FC.

Liam has always been a keen footballer from an early age and shown great potential. He has played for a few teams during his career, but recently left Haven FC to take the next step up to junior level in joining the Maud Junior FC squad.

Kevin Park Manager of Maud FC Said: “Myself and Liam have a great relationship off the park and I’ve always told him if he gets himself fit, he definitely has the ability to make the step up to Junior football. It finally feels right for Liam to give it a go, and credit to him, he has come in and worked exceptionally hard and he has shown his quality in both training and games. Liam was excellent against Buckie Thistle so already he’s proved to himself that he can compete. I’m looking forward to seeing him develop further and challenge all season within the squad as we strengthen again.”

Already showing his quality as an attacking fullback on the field we look forward to following Liam’s journey during the season. Hopefully Liam’s form will continue to grow, and he will have a very successful career at Maud Junior FC. Good luck to Liam and the team for the 2021 season, we wish you all the very best form all of us at Namaka Subsea.